Finding Winners in jump racing can be made easier by looking at what actually wins these races and here I give you some winning pointers plus a little system with a good profit over the last four years.

Some of the stats probably won't surprise you that much but there are one or two that may, especially when you see some of the profits made over time.

By using the Inform Racing system builder I have looked firstly at every chase race that has been run since 2018 between the months of October and April inclusive.

All images can be clicked to enlarge them if needed.

Firstly looking at the stats for each year you can see that in fact, just backing every horse in a chase race in 2020 would have actually turned a profit of 86.18 pts at Betfair starting prices, however this is not something I would suggest that you do and of course over all you can see that there is a massive loss, as there would be backing any race type and every horse blindly.

Looking into the stats and breakdowns.

So in the main I want to be looking at the Win SR% columns.

Older horses clearly don't win as much as the younger horses, in fact horses aged ten and older win at best half as many times as 4 year olds. Concentrating on horses that are 7 years old and younger may be the best way to go here.

Clearly a recent win is something well worth looking out for and interestingly, backing all horses that ran within the last 14 days would have only shown a minimal loss of £13 to £1 stakes since 2018 with a close to 30% strike rate.

Backing all those that won within the last 31 days would have turned a decent profit of £177 to £1 stakes since the start of 2018.

Where you see the bottom row, NA, this is for horses that have never won and whilst these show a pretty decent profit, the win percent is only 11% and you can see on the far right, there was a winner at BSP 224.95 which skews the overall stats somewhat.

Horses that won last time out win again almost twice as many times as those that finished 5th, 6th or worse and would have given you a £53 profit to £1 stakes just backing all last time out winners.

Just concentrating on those that finished 1st, 2nd or 3rd would be the best option as the winning percentages are far greater.

One thing worth noting is the win percentage and overall loss of those horses that didn't finish last time out, those that were pulled up or fell for example.

Despite a previous winner at BSP 224.95, there is still an overall loss of -£510 and a poor win percentage of 9%, so ignoring horses that didn't finish last time out in chase races will probably prove beneficial.

4. How far a horse won by last time out

Whilst you have seen that last time out winners have a good strike rate in chase races, it is worth looking at the distance those winners won by as there are some nice results for those that won easily.

There is a fair to low strike rate range for those that dead heated or won by a nose or short head, although not a great loss overall, however those horses that won last time by 3 lengths or more all have a better than 20% strike rate and show an overall profit of £178 to £1 stakes.

Below I have added the rule to show all horses that won by 3 lengths or more last time out to show you the stats for these horses alone. Again, this may be something you want to take into account when looking for chase race winners. 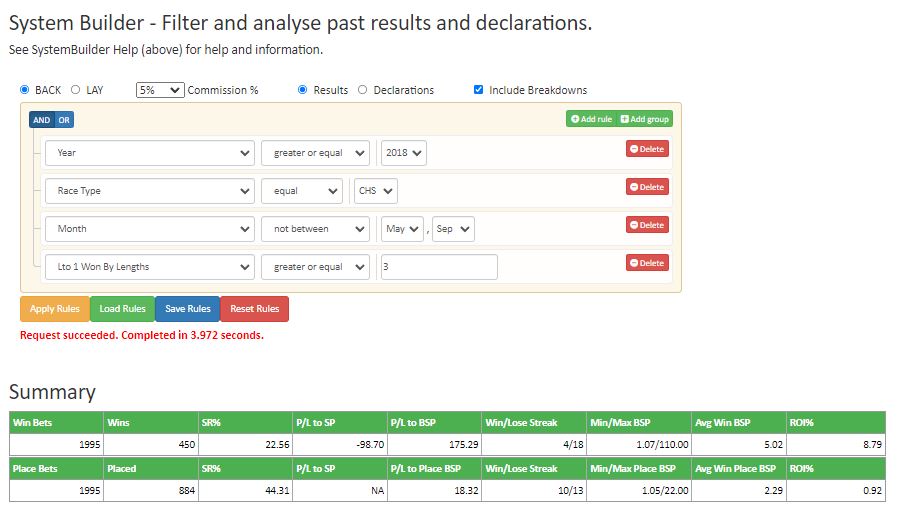 Whilst each rating is slightly different you can see that more winners come from the top two or three rated for all of them and maybe somewhere you want to start honing in on. I have always personally concentrated on the top 3 rated by the Master Rating, which shows the best rating for each horse in the previous 12 months. 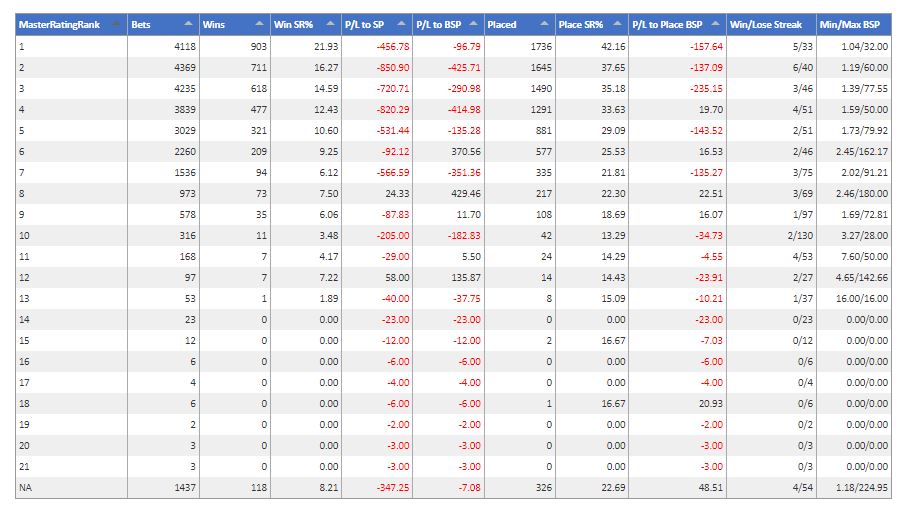 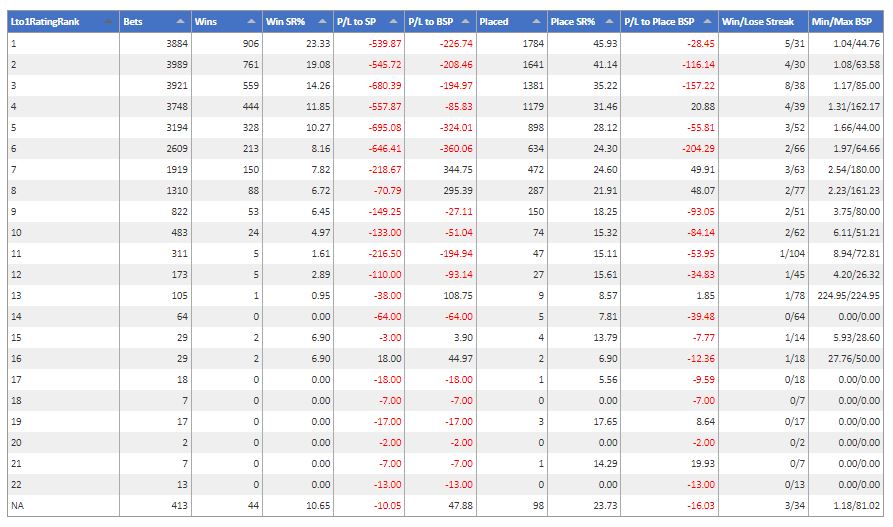 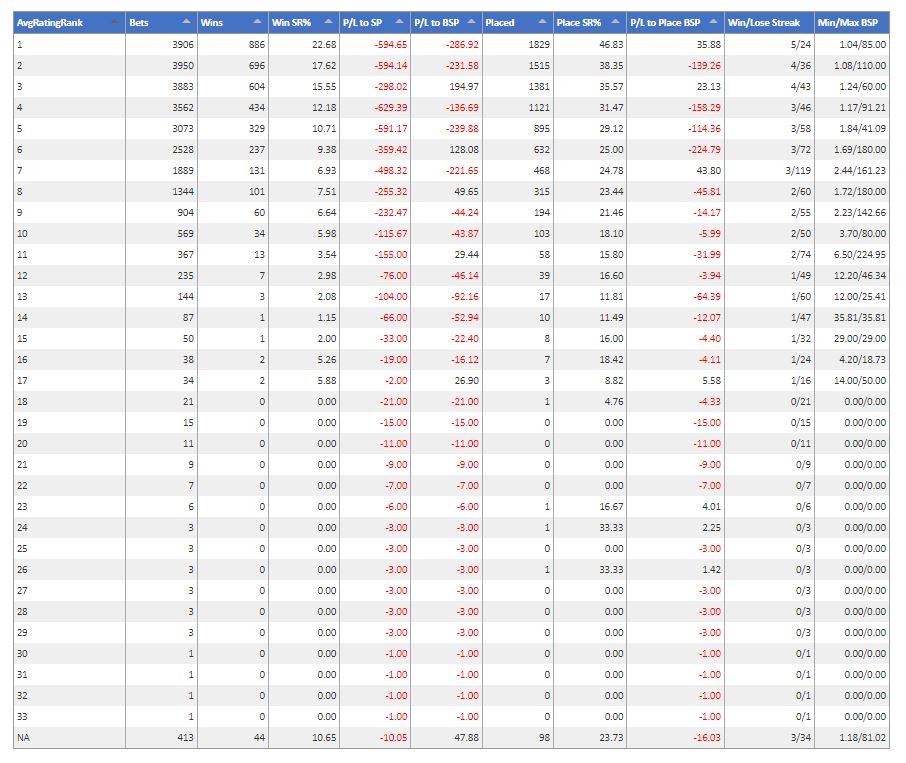 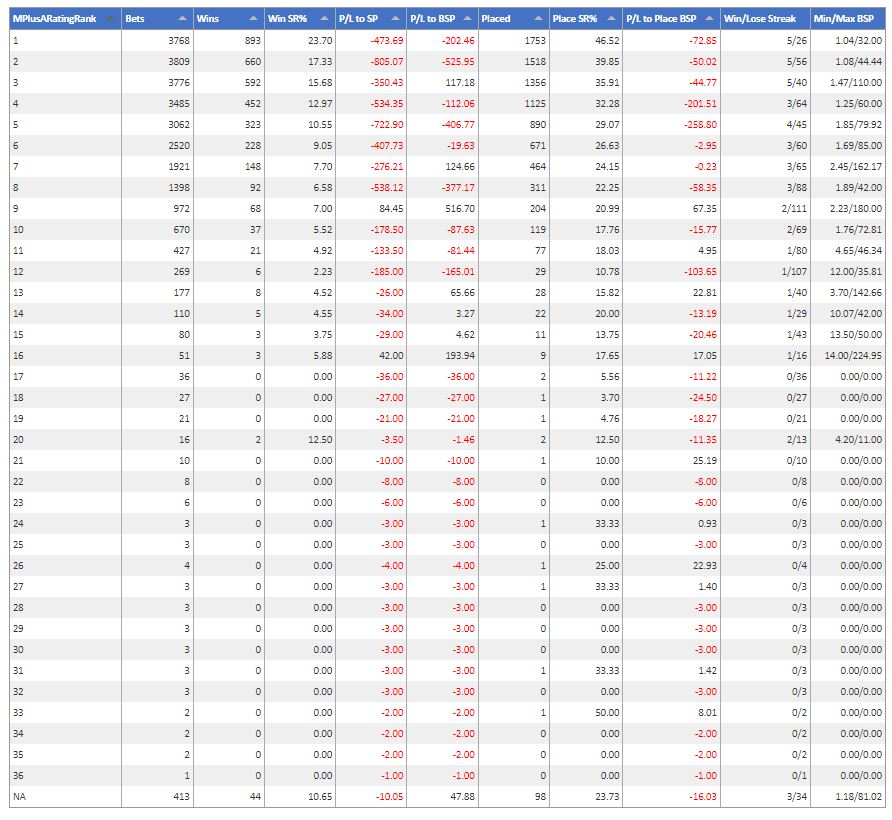 There may not be anything that overly surprises you with these statistics but hopefully it has given you some food for thought when looking to place a bet in chase races.

I would not suggest that you took all of the above and just bet them blindly but more look at the stats in each category and see what you think is imporatnt. What you can see is that by ignoring one or more of the suggested categories you will have a far lower strike rate of winners and will be putting the odds against you.

You can see a short video about how the Result Breakdowns on the system builder will help you filter your systems very simply indeed, by clicking here.

Playing around with the system builder, I came up with the following system which you may want to look at or try to improve. There are not a great number of bets but it has shown a nice profit with some decent priced winners and good strike rate. 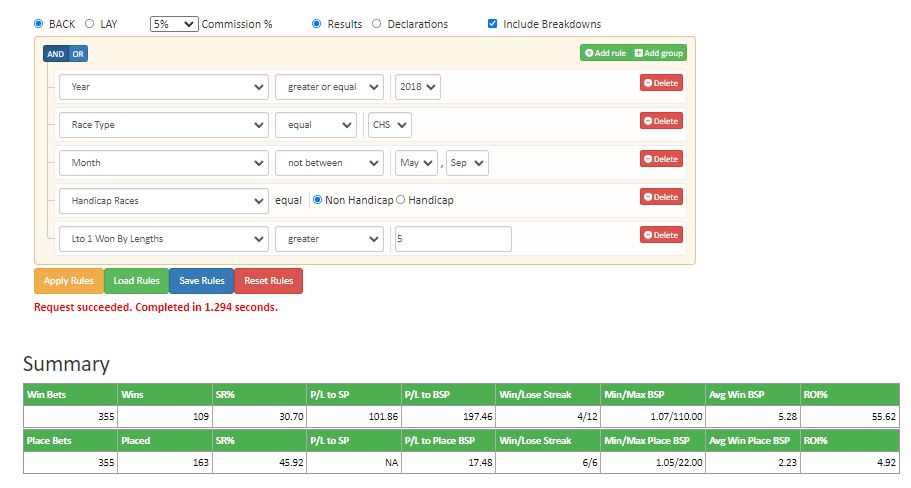 How To Increase The Strike Rate and ROI% Of The Favourites