Follow us on Twitter to get notified when something is posted on this 'My Thoughts' category.
This is not a tipping service
You can click any images on this page to enlarge them.

Two at big prices for today.

Please only back these two horses if you yourself think they have a chance as they are both currently big outsiders and as likely to fall out the back of the TV as much as squeeze in for a place but there are couple of factors worth noting, that could give us at least a place on one.

Ok, so now I have filled you with as little confidence in these horses as possible, lets get down to it 🙂

The first horse is a 12 year old running over fences and is currently 40/1 outsider of the 11 declared, Native Robin.

Now this horse won last October and December as well as this January and February, so knows where the winning post is and very recently at that. All wins were in normal, all age handicaps no veteran races and since the last win has run in two class 2 races, back down to class 3 today.

You can see all the wins highlighted in yellow below, so racked up a hat trick, winning the last race on a mark of 125. 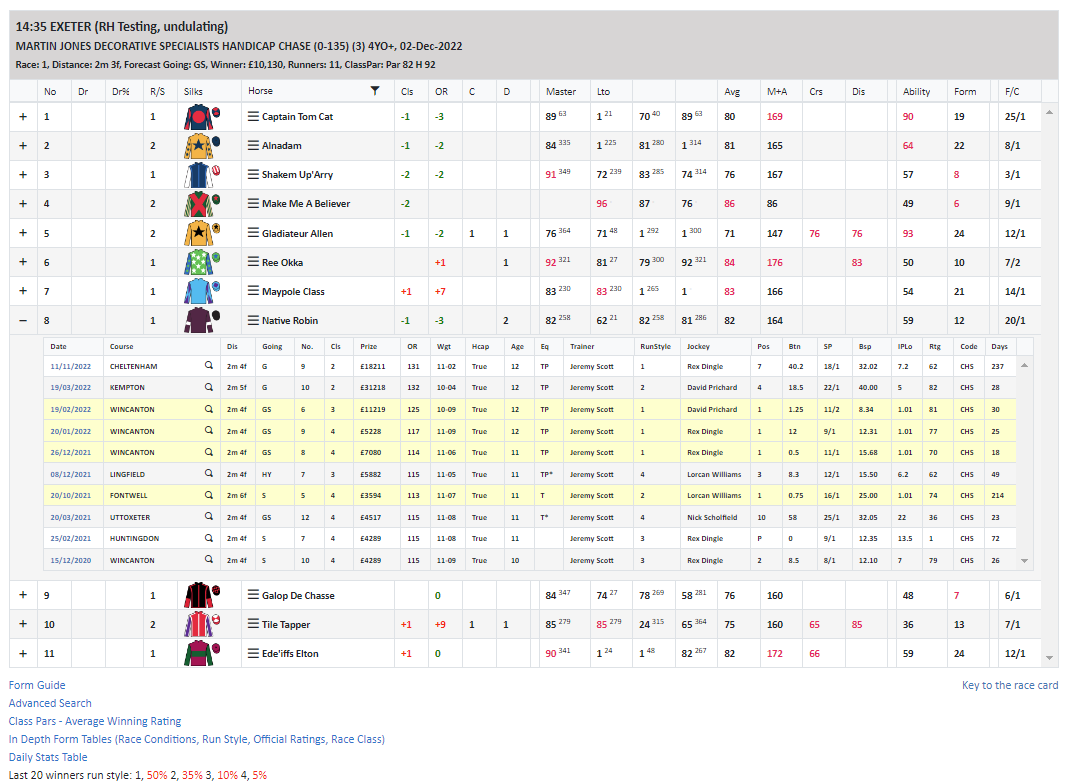 Up in class after that race and up in the weights, with the recent hopefully pipe opener at Cheltenham.

The horse has been dropped 3 lbs but is still 3 higher than the last win, so I have a theory on the future of this horse coming up shortly.

First of all just take a look at the advanced search, when filtering just by the going, Good to Soft and Chase races. 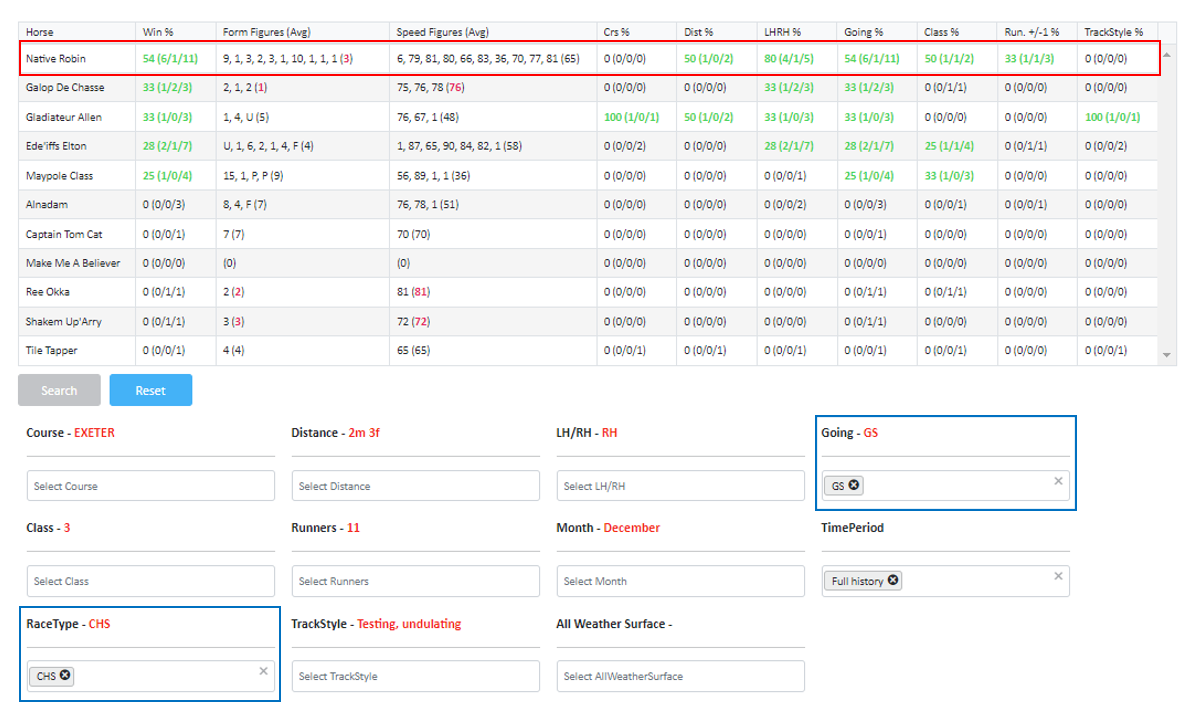 You can see Native River has won 54% of his races when it was a chase race on Good to Soft and placed 7 from 11 times, also often at decent prices.

So whilst the horse is now 12 and is still 3 lbs higher than his last winning mark, the horse certainly has it in him to run well.

My theory is that the horse could be running today to get his mark down again and I wondered if the trainer was planning something soon at Wincanton where the horse has previously won 5 times before.

In fact looking at the upcoming calendar there is a race at Wincanton on December 26th that Native River won last year albeit off a much lower handicap mark.

The horse would have to drop a few more pounds today to get in but that is possible if he runs very poorly, so depending how well or badly the horse runs this afternoon, I may put this one in my tracker, hopefully to see him out next at Wincanton sometime soon.

So the first horse today ran okay until coming into the final straight but it will be interesting to see what happens next with that one. It will definitely be dropped a few pounds after finishing 10th of 11 that's for sure.

I don't want to give two that run no sort of race in one day but it is very possible, however these are both big priced runners and a few popping in over the season keeps the betting bank healthy 🙂

Not too much to say about this mare apart from she has never won on the all weather but has been placed three times out of ten.

The main reason I am looking at this one is because I am looking to forgive one bad run in the hope that the horse can run more like she did the two previous starts on this surface and over this distance, albeit at Wolverhampton and not here at Newcastle. 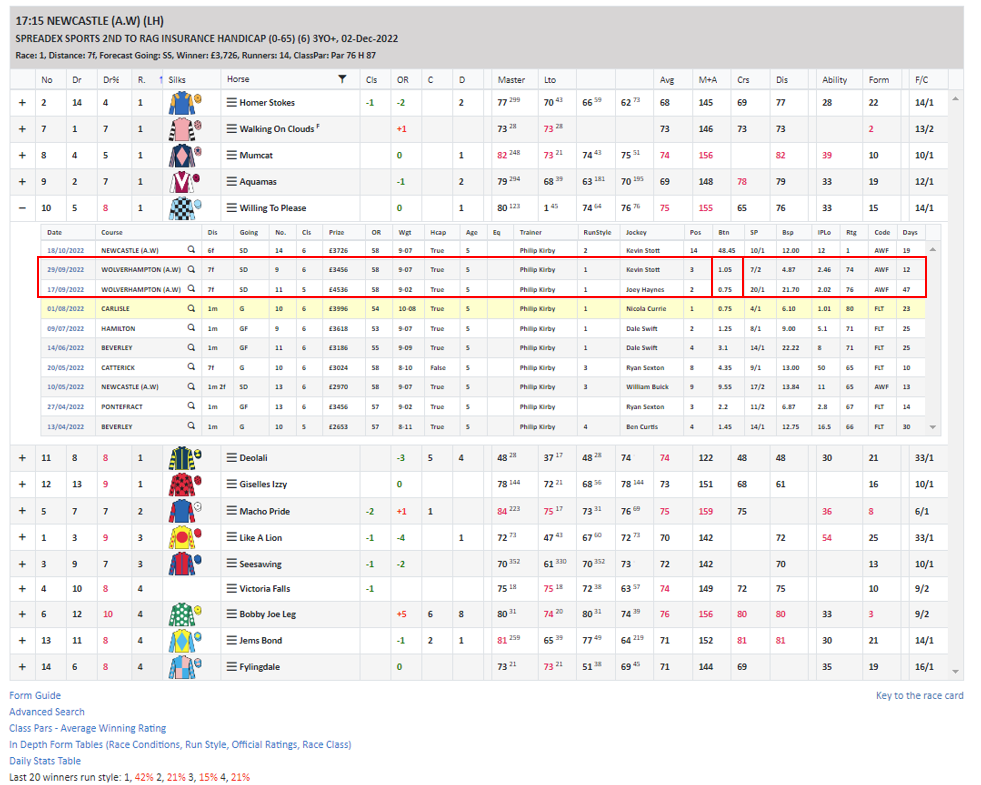 The horse has only ever won over 7f and 1 mile, so last time out, whilst something certainly went wrong during the race, it was over 6f which is probably too short a distance.

Unfortunately getting beaten nearly 49 lengths last time hasn't changed the handicap mark for this horse but you can see on the image, highlighted in red, that the two previous runs were also off today's mark of 58 and it was only beaten three quarters of a length and just over a length.

If you didn't know, you can hover your mouse over the magnifying glass after the course names for all runs to read the in running comments.

Having won over Carlisle twice over 1 mile, it is likely the horse does want a mile or a bit more but the two runs at Wolverhampton were more than fair over seven, so I am basically ignoring the last run in the hope that whatever went wrong doesn't happen this evening.

The horse is an out and out front runner as are a number in the field but I expect him and another outsider Deolali to get to the front.

Like the one we had last week that went on to win, I am hoping that the horse can stay up there long enough to snatch a place at least.

Currently the 40/1 outsider of the twelve runners, so decide for yourself whether you want to be on this one or not.

You can use some or all of these methods to find other horses to back everyday using the Inform Racing race cards.