Follow us on Twitter to get notified when something is posted on this 'My Thoughts' category.
This is not a tipping service
You can click any images on this page to enlarge them.

One for this evening at Wolverhampton

I had my eye on two today but went off the first one due to it's price. Not because it was too short, but because it seemed too big.

The horse was Snookered and was down in trip by quite a bit from his last two runs, back to a distance he could win over. Plus it was down to it's last winning handicap mark.

To me these two factors would not be 'hidden' in any way and just thought it would have been around 7/1, 8/1 instead of 16/1 or so, had the yard and the bookies thought it was more of a danger.

My gut told me not everything felt right so whilst I did put this up on Twitter as something I had looked at and have had a small each way bet on the horse, I couldn't suggest it as a strong bet.

As I write this, the race is 10 minutes away so I will soon see how good my gut feeling was 🙂

The horse tonight has a similar profile to the winner at the weekend but in a slightly different way, in that this horse has won races before, although not for a little while now.

The horse is Astro Jack. 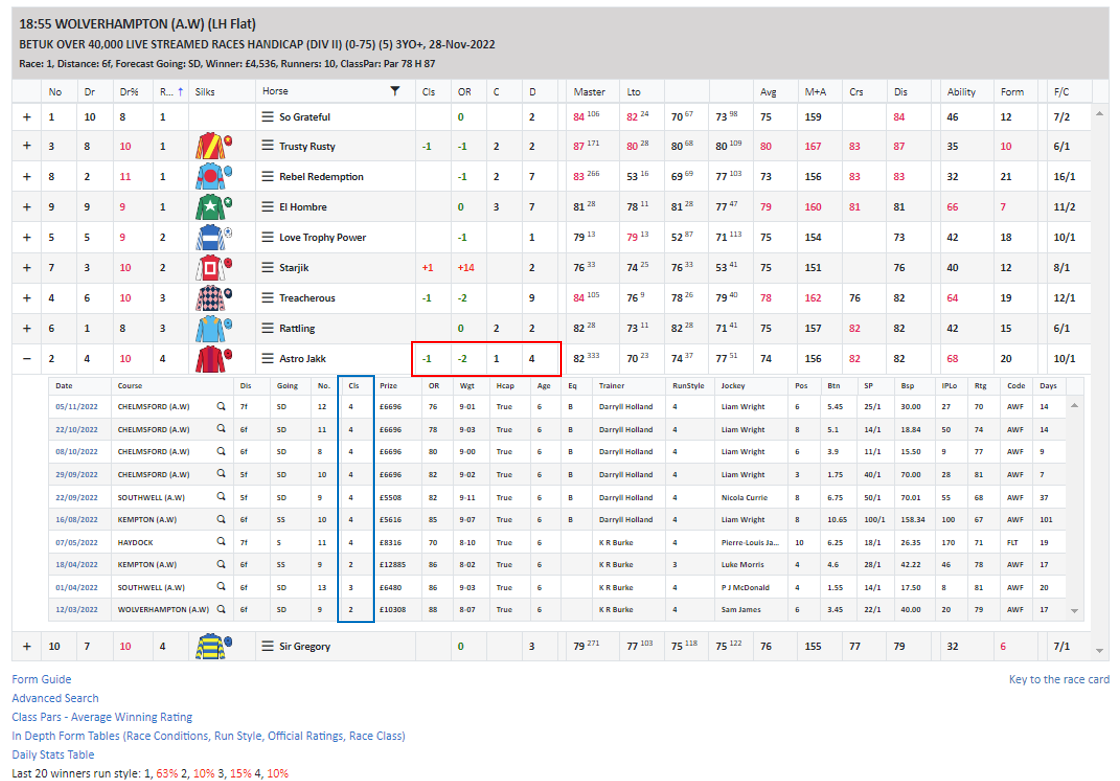 Today's race is a class 5 handicap and as you can see by the blue box, the horse has been running in class 4 races the last 7 times, higher even than that before and in a few, not beaten that far.

The horse has been running below it's last winning mark for a while now and has been dropped another 2 lbs today, along with finally dropping in a class 5 race today.

I can't work out why the horse has run so many times recently at Chelmsford when he has won at today's course before and not at Chelmsford.

On that, you can see in the red box that the horse has won once at the course and 4 times at the distance of 6 furlongs and dropped in class -1,  and dropped 2lbs -2, as already mentioned, all clearly shown for you on the race cards.

The horse is one of only two hold up horses in a race with enough pace on in this sprint, without hold up horses being advantaged too much however as you can see at the bottom, with just a 10% strike rate.

This won't worry me too much as the horse is drawn nicely in stall 4 and can still hopefully come through when those at the front start to tire and spread out across the track as they can do here sometimes.

I get the feeling trainer Daryll Holland is selective about when he runs his horses and has a 50% strike rate from only 4 runners in the last two weeks, so hopefully this was the plan to return to class 5 and Wolverhampton this evening.

The forecast price was 10/1 but the horse is currently second favourite at around 11/2 which is good as it is nice to know others think the horse has a decent chance.

(Unlike Snookered who finished 5th in the end, so I consider I got that one right today with the price not being around where I thought it should be, even though I did have the small each way bet on the horse).

All of these things, along with your gut can point you in the right direction, so you have to take everything into account.

Result:
6th 9/2
BSP 6.71
In running comments:
Slowly away, raced in last, outpaced and struggling 2f out, ridden from over 1f out, some headway inside final furlong, never dangerous (op 5/1)

You can use some or all of these methods to find other horses to back everyday using the Inform Racing race cards.