Examples of past cards.

Finding big priced winners can seem a bit of a task at times, after all most of those that do are a ‘surprise’ to most pundits as they are usually horses bang out of form and on the face of it should really not be getting close to being placed, let alone actually winning.

However, there are ways of understanding why some of these runners do win and Inform Racing can show you what to look for using the ratings themselves as well as the quick view race stats we provide, which from start to finish will allow you to read a race in no more than a minute or two.

With form figures of 95876 for the current season, this 10 year old was forecast 11th favourite out of 14 at 16/1 by the Racing Post and it’s comment was that he had to ‘up his game after some subdued efforts this season’. Take into account the horse had run at the 7 furlong trip on seven previous runs and had not won once suggested that for all intents and purposes he was just there to make up the numbers.

But looking at the Inform Racing race card for the race and the easy to read stats boxes, it seemed that the horse was not just a runner but a runner with a real chance. 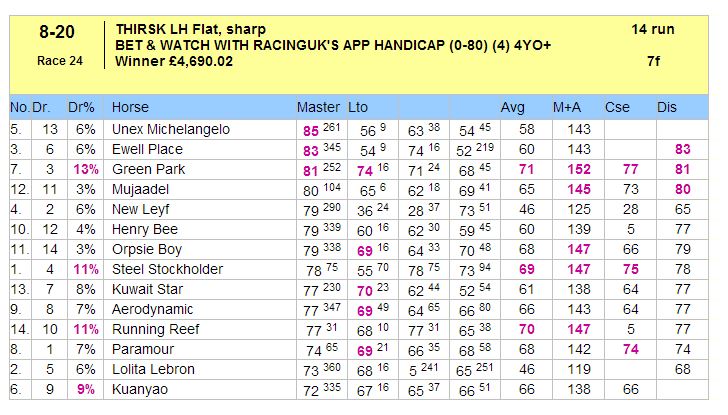 First of all, by sorting the card above by the Master rating which is recommended, you can see that Green Park is not only third top rated for the race with 81, but is also clear top rated on his last run (Lto) with 74, 4 clear of the nearest rival Kuwait Star with 70 and 5 clear of his nearest rival in the M+A column with a rating of 152. (Incidentally Kuwait Star came second at 8/1 and helped payout a nice Exacta for the forecast of £274.40 to a £1 stake).

Being 3 clear or more in the M+A column is number 1 of the three main Inform Racing systems all subscribers receive, so Green Park was an immediate pick for this reason anyway, however it is worth looking a little deeper into what we provide that will not only help save hours of time but also find decent winners like Green Park on a regular basis.
By hovering over any of the last three ratings for each horse you will see a pop up box with details for each run, as shown below for Green Parks last run where he achieved the rating of 74. 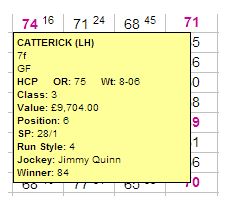 Here you can see at a glance, full details of the run including the fact that it was a class 3 race where as today’s race was class 4 so the horse was dropping in grade to what should be an easier race and also that as we know already, the horse only came sixth but it still had a top last time out rating of 74. Inform Racing system number 2 states that you should look out for horses that are one of the top three rated horses in the last time out column and that also finished out of the frame, fifth or worse. This will give us an indication of a good run as the finishing position is not good but the rating is, and as most people will not have these ratings, you are gaining an edge over others who will just see the finishing position.

Despite the horse not winning at the 7 furlong distance before, the horse had run in 128 previous races, so the fact he has only been tried at 7 furlongs seven times is not actually that off putting and if you take a quick look at the Inform Racing form guide below you can see that it had actually come second twice in these runs at 7 furlongs, so not as bad as first thought perhaps and you can also see that Green Park has the second best rating for the distance on the main race card of 81 above despite not actually winning over the 7 furlongs.

So, in this example we have a horse that is top three rated, clear top rated last time out after only coming sixth, clear top rated in the M+A column, second best rating at the distance despite not winning over the 7 furlongs, dropped in class from 3 to 4, running today on its last winning handicap mark, from a good draw and the horse that was allowed to go off at 25/1!

THE BEST THING IS, YOU CAN FIND ALL OF THIS INFORMATION FOR A WHOLE RACE IN NO MORE THAN TWO OR THREE MINUTES USING THE RACE CARD AND QUICK VIEW RACE STATS BOXES.

Quite often there will be one or two definite reasons why a horse has a better chance than it seems and for that reason, bigger odds can be had than possibly should be. Wouldn’t it be nice to be able to wait for these big priced runners with a real chance instead of backing so many losers that don’t? They won’t all win but when they do it is far more exciting than having backed a 2/1 favourite I can tell you and there are plenty of winners that have some or all of these pointers above that win at all prices every week.

On the same day another horse stood out for me in the 5.00 at Chepstow.

Jack My Boy was top rated in the Master, M+A and Distance columns and was carrying just two pounds more than his last winning mark. He was top three rated last time out despite only finishing 8th and was also dropped in class from 4 to 5 and with a win and place strike rate of 38% was a great each way bet in an open eleven runner handicap.
Result: Jack My Boy Won 7/1

There were 12 top rated winners on this day including Beauchamp Xerxes Won 10/1, Medieval Bishop Won 9/1 and Underwritten Won 6/1.

You will not always be able to find the big priced winners, there are plenty of stand out bets at smaller prices too and this one below is worth looking at.

Jewelled was top rated and top weight in the race, (this is system 3 on our systems list which all subscribers receive), clear top rated by 5 in the M+A column with good VDW and ability figures. In a race of only 7 runners this horse was forecast at 6/1 fourth favourite. What you can see as well as the previous good pointers is that its last three ratings, (74, 77 and 71), are not bettered by any other runners last three ratings. (Banreenahreenkah’s 77 equalled Jewelled’s best, and two other runners scored close ratings with 73).

The other point to make is that looking at the horses hover box below you can see that Jewelled was being dropped from Class 4 last time out to Class 5 this time and had also been dropped three pounds in the weights. 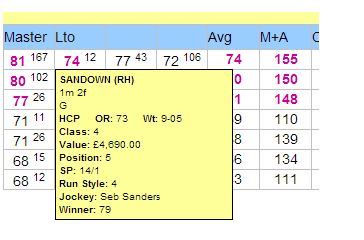 Another good winner and with good reasons to back it was Look On By running in the last race at Hamilton. Won 20/1

This horse was top rated and had the top distance figure too, plus apart from Tortoise rating a 76 last time out and Nothing Special rating 73 two runs back, it had the joint third best figure of all runners last three runs with a 70.

Looking at the horses form box below, you can also see that this horse was now running one pound lower than its previous winning mark, 52 compared to 53, plus the jockey had a 50 strike rate on this runner as well. 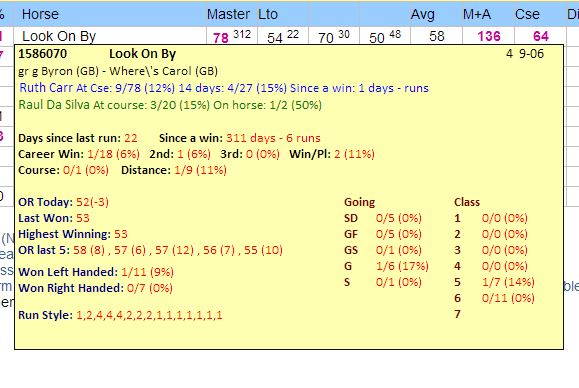 This would have been enough for me to suggest a good bet, especially with the trainer in very good form at the time too, but one other thing really stood out and that was the run style figures. With seven ‘1’s’ from its last seven runs, seen on the Run Style in the box above, this meant that horse had led or been prominent when running. There were no other runners in this race who would likely lead or want to start off in front and ally this with the fact the horse was drawn in the best stall for the course and distance, (see the race card showing drawn in stall 5 with a 21% strike rate), it had a very good chance of leading and not getting headed.

The race commentary for this horse in the race was, “Made all at steady pace, ridden over 2f out, held on well final furlong”, just as we had thought it might and winning comfortably by a length and three quarters at a decent 20/1.

Shades of Silver had incidentally run three times over this 1 mile 4 furlongs trip and had lost them all but this horse was clearly too good for the rest of the field and despite drifting from an opening show of 7/2, won easily by a length and a half at a handsome 5/1. A great price bearing in mind the fantastic ratings.

Inform Racing cannot provide the winner of every race but it is not about finding a winner in every race, it is about looking for the circumstances when a good bet can be placed and with Inform Racing you have everything at hand, all in one place to get the edge over other punters who don’t and take full advantage of horses running at bigger odds than they maybe should be.

It can take less than 15 minutes to go through a whole days racing to find bets such as these above as all of the info is clearly visible for each runner, all on one page.