I was asked recently about how to best use the Speed Rating Class Par figures on the website and after explaining what the user should be looking for, I found a couple of nice examples for you at the weekend.

Speed Rating Class Pars are the average winning rating achieved for each type of race and age group, so any horse that has not achieved the ‘par’ for the race in question can often be ignored.

Not every race will have horses that have achieved the par figure, but this will normally be due to the fact that the runners are all unexposed, lightly raced and/or open to improvement, able to achieve par or near par in future races.

In most cases, all age races and handicaps in particular will have a number of horses that have achieved the par for the race or better and these are the ones I suggest that you look at in the main, honing in on the recent ratings they have put up.

This class 3 handicap for older horses has a number of highlighted ratings, especially in the last time out column (Lto), however it is Treasury Notes that you want to be looking at and his last two ratings of 84 and 83.

If you click the ‘Average Class Ratings’ link underneath each card, a box will appear on the screen, as below, showing the speed rating class pars for the race types and age groups.

If you work down the left on this chart to find class 3 handicaps and across to 3YO+ 4YO+ you will see that the par figure, or average winning speed rating, for this type of race is 82. 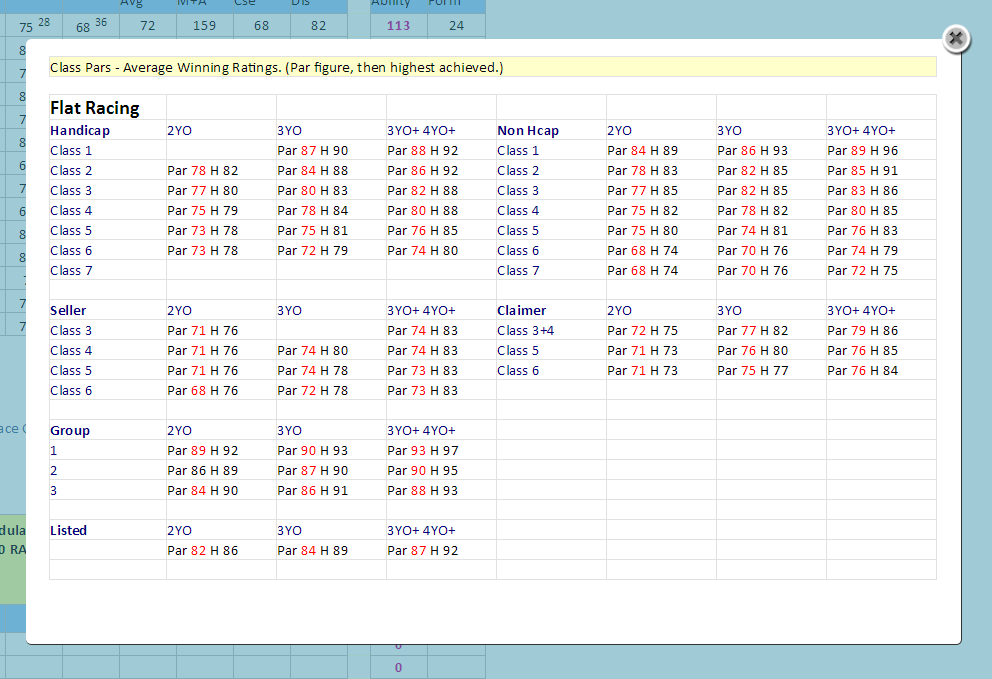 Looking back at the race card and you will see that Treasury Notes last two runs as I have already said scored ratings of 84 and 83, both of which were higher than the par figure for the race, meaning that the horse has been bang in form recently and was likely to run well again today.

As well as this, the rating of 83 was the best rating in the race last time out, despite the horse only finishing in 5th place.

Treasury Notes Won 15/2, staying on strongly despite not getting a clear run about two furlongs out

Straight away you can see that the Master and Lto rating of 85 for Gravity Flow stand out a mile compared to the rest of the field and it becomes even more apparent when you look at the speed rating class pars table above and see that the average winning rating for a class 4 handicap for older horses is only 80.

In fact anyone not using the speed ratings would look at the form and see two very evenly matched horses. After all they had both just run in a class 4 handicap, both races were worth £5,175 to the winner and both horses won.

By hovering over the ratings users can see the details of each run and if you did so for this race you would see these details for both horses last race as below.

As you can see, there is very little difference in both of these races and the results and it was probably a toss of the coin for most punters between the two favourites for who was going to win.

That is unless you had access to the speed ratings!

Gravity Flow Won 2/1 by a length and a half and probably would have won by further had she not hung markedly across the course inside the final furlong.

These are just two examples of how to use the speed rating class pars to highlight horses that are bang in form and likely to win and having all of this information to hand that most punters just don’t have, can really be the difference between winning and losing in the long term.

I have made a video of these two examples on the link below which also contains two more winning horses selected on the same days as those above at 4/1 and 9/2.

These two are slightly different examples as they show you how to look for horses that are clearly rated better than the rest of the field despite what the odds say for the race.

In fact the second horse is clear by a long way of the short priced favourite for the race who was beaten into third by our ‘speed rating’ winner.

The video is now on a new page with all of the other tutorial videos for Inform Racing as well the videos I have created for the In Running Trading Tool too.

"For me there was never any question of not renewing. I have made many times the subscription costs over the past 2 years using your ratings, so thank you for the excellent service you provide, and for introducing me to the fascinating world of speed ratings."

"Hi Ian, I just wanted to thank you for your product and sharing your ideas with us. So far, as a new customer and follower of your service, I am very happy with the product and support."

"Hi Ian , I have picked a few winner's from your ratings and I've got to say your ratings are the best and the time you spend explaining them to us is fantastic and the tips you give us on gambling and helping us to pick winner's. Your service is second to none, keep up good work."

"A big thank you for the updates on profitable systems and techniques you are supplying us subscribers with, both the 10 year trends and the simple LTO methods are areas that have been a rich source of profits for me in the past, and the fact that your speed ratings are so strong they identify and produce better profits so quickly than I could have achieved in the past is a testament to yourself, so a big thank you."

"Your figures continue to be excellent and the system builder is brilliantly fast. I really cannot praise your whole site enough."

"I have been looking at the tissue tool and system builder for the last couple of days and love it! "