Warning: Attempt to read property "post_title" on null in /homepages/13/d94743177/htdocs/inform/wp-content/themes/ignition/inc/image-resize.php on line 62

How Poor Form Can Point To Winners

There are many common ‘laws’ in reading racing form and one of those is to back horses with good recent form figures because the horse has obviously been running well, or fairly well at least.

Another is to concentrate on those horses at the head of the betting market.

After all approximately 70% or so of all winners come from the first four in the betting, so by combining fancied horses with those in form, then you will be able to find a lot of winners, right?

Well the answer to that is yes and no and it is the ‘no’ part of this that I want to look at today.

If you see a horse that has recent form figures of 51221 then you would not at all be surprised to this horse somewhere at the head of the market.

After all it has come first twice and second twice in it’s last five races.

But what about if you saw a horse that had recent form figures of 449755 that was forecast as the favourite in a race where plenty of the other runners had either won or been placed in their recent runs?

I am hoping that it would make you stand up and wonder why.

Why is it that this horse is so short in the market when it looks like it has been badly out of form?

Well, at face value this horse looks like it has been out of form but there could be a number of ‘hidden’ reasons why this horse is so short and they could be any of the following:

1. The horse may have only been beaten a length or less in a number of these runs despite the ‘poor’ figures.

2. The horse may have been massively dropped in class for today’s race having run ok against far better horses in recent races.

3. The horse may have been moved to a far bigger stable and is now running for the first time for a top trainer who is bang in form.

4. The horse may have been off for a while and had a wind operation or been gelded and is likely to run much better now.

5. The horse may have been off for a while and has been dropped to a very low handicap mark compared to it’s last winning mark.

Now if you new it was one or two of the reasons above, then you would understand more why the horse was quite so short in the betting forecast.

At the weekend I found three of these horses, two on Saturday, one on Sunday and guess what? All three of them won!

The first horse is Can’t Change It in the 2.25 Lingfield.

As you can see below, the horse has recent form figures of 6-48587, whilst there are lots of other horses in the race who have recent winning and placed form. 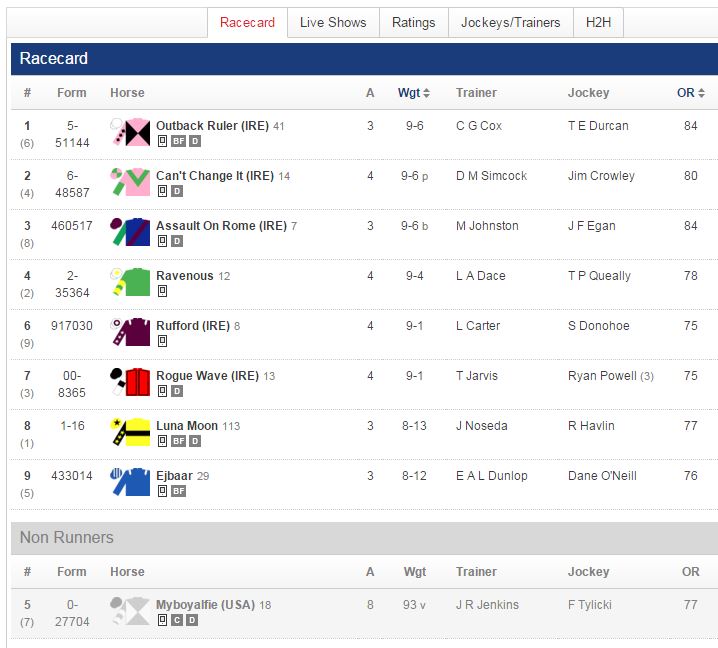 Can’t Change It was forecast as the 9/2 second favourite and went on to win by three and three quarter lengths at 3/1.

In the last race on Saturday, Azrur had form figures of 000687 and certainly nothing to write home about, however the horse was put in as the forecast second favourite at 9/2. 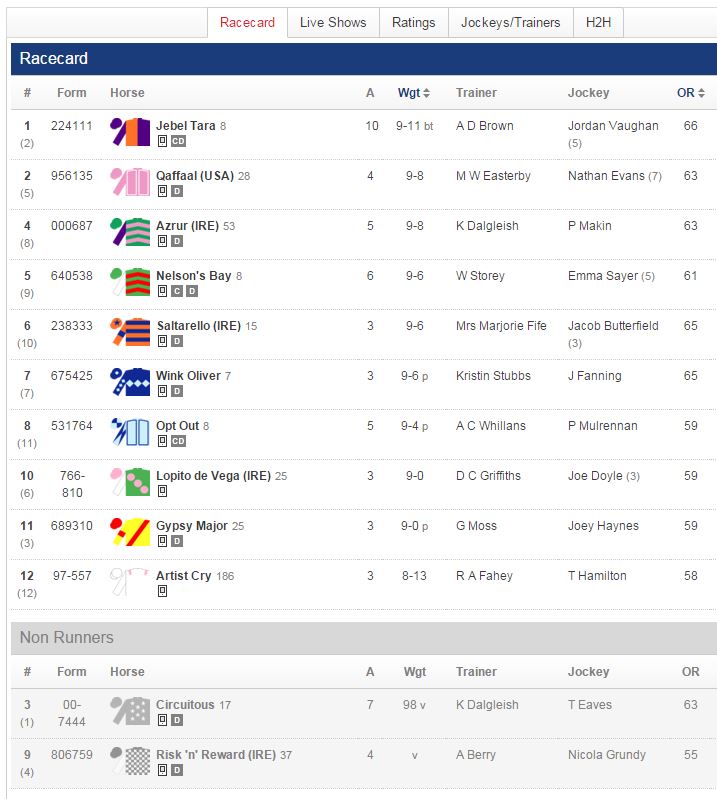 Now I can count seventeen 1sts, 2nds and 3rds that have been achieved by other horses recently, yet there was only one horse, Jebel Tara who was put in higher than him in the forecast.

As I have said, when this happens you have to ask yourself why?

Well the Racing Post wrote about Azrur: ‘Uncompetitive on six starts for Robert /Kenny Johnson this year, up to July, but is very well handicapped on last seasons form for David Brown and a market move could precede a very big run on his stable debut.’

So the horse was now well handicapped and had moved stable and was running for the first time for Keith Dalgleish who has been in tremendous form throughout the season.

The confidence in the market arrived as the horse went off as the 9/4 favourite and won easily by a length and a quarter.

Finally on Sunday you can see the form of Zuzinia below. 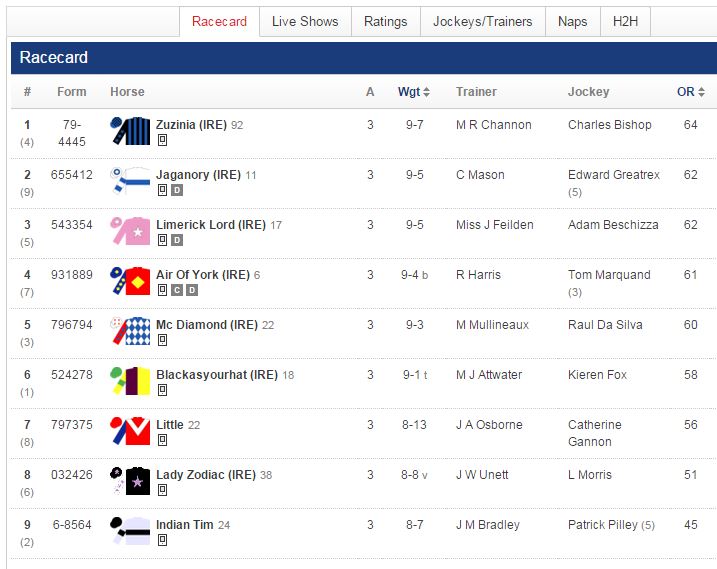 Again there is enough decent form for the rivals here to ask why Zuzinia is the third favourite at 6/1, when you see the form figures she has of 79-4445.

Suffice to say the horse went on to win, only by a neck this time but at a very tasty 17/2.

Whilst you can clearly see what I am pointing out to you here, there are a couple of things to note when looking for horses such as these three above.

You want to make sure that there are two or three horses in the field with at least average, recent form, although situations like the first race at Lingfield are ideal as nearly all of the other horses have wins or places to their name.

Races where most horses have only had two or three previous runs may be worth avoiding, in fact races for three year olds and above and mainly handicap races are the ones to take most note of.

Also and this is up to you, I would pass over any horse that has a third in its form from the last five or six races and just look for horses like the examples whose best form figure is a 4 or worse.

Perhaps if the horse had form figures of 307005 where others have good form figures but sticking to 4th or worse should really highlight a horse that ‘looks’ out of form.

Only look at the first three in the betting forecast and only up to 6/1. Once horses are forecast at 7/1, 8/1, even if they are second or third favourite, it shows the chance of the horse is not the same as if put in at 6/1 or less.

So there you have it.

Going against the grain and looking for horses with poor recent form, can on occasions point you to a winner – or three!

Warning: Attempt to read property "post_title" on null in /homepages/13/d94743177/htdocs/inform/wp-content/themes/ignition/inc/image-resize.php on line 62

Betting Advice I Would Give My Younger Self

"Hi Ian. Just wanted to say thanks for the email regarding horse profiling. https://bit.ly/2RiXVnj
Went through a few potential horses this afternoon using minimum 30% in the overall and code wins with a minimum 10 races run, before digging deeper to find its best racing conditions.
Came up with Omany Amber in the 7pm at Wolverhampton and it won by 3 .5 lengths at 10 and 3.25 for the place.
Gave me real confidence to place a bet and was well rewarded.
Thanks, Craig."

"Hi Ian, Ive been a member of your service for a long time, I joined in 2008. I am always amazed how many winners your cards help me to find."

"Although racing is difficult to fathom , your ratings are the best in the business."

"Thank you for your fantastic service, its a vital part of my trading plan. "

“I think your ratings are like gold dust and I would recommend any person who has an interest in betting to follow your ratings. The method I use incorporating your ratings has kept me going quite nicely as a serious hobby.”