Backing The Outsider Of Three

Three horse races can be quite tactical affairs that are often run unlike a normal sized race.

You could get one horse that wants to go on and get a clear lead or you can get all three not wanting to give anything away so all three dawdle along for the first half or so of the race.

So the first thing I did was to add two very simple rules to the system builder. The first one was the date range, so I am going back to the start of 2018, secondly we are looking at three runner races only.

(All images can be clicked to enlarge them if needed.)

After we have run these two rules and by looking at the BSP Rank for each horse, we get the following that shows the win percentage and profit/loss for the BSP favourite, second favourite and third favourite, or outsider of the three.

Despite winning less races overall, the third favourite does show a smaller loss than the favourite, however the second favourite has made a profit overall of just over 50pts.

Now we have seen this small profit on the second favourite of three, I thought I would see if there was anything that showed up when looking at the system builder result breakdowns.

The first thing I saw was the race type category and despite some very small profits for hurdle and NHFlat races, it seems that all weather and flat turf races hold the aces, when looking at the second favourite of three. Plus there was close to a 30% strike rate for these when combined too.

So we are not looking at anything life changing here, but there is some small evidence that the second favourite in a three horse race, could be worth backing in flat races.

The only category I could find that gave us anything extra was the distance of the race where it was worth ignoring 5f and 6f races. This gave us the following summary of results, with only about 44 bets per year but a decent 36% strike rate and 78 pt profit.

It may be something you want to look at further. 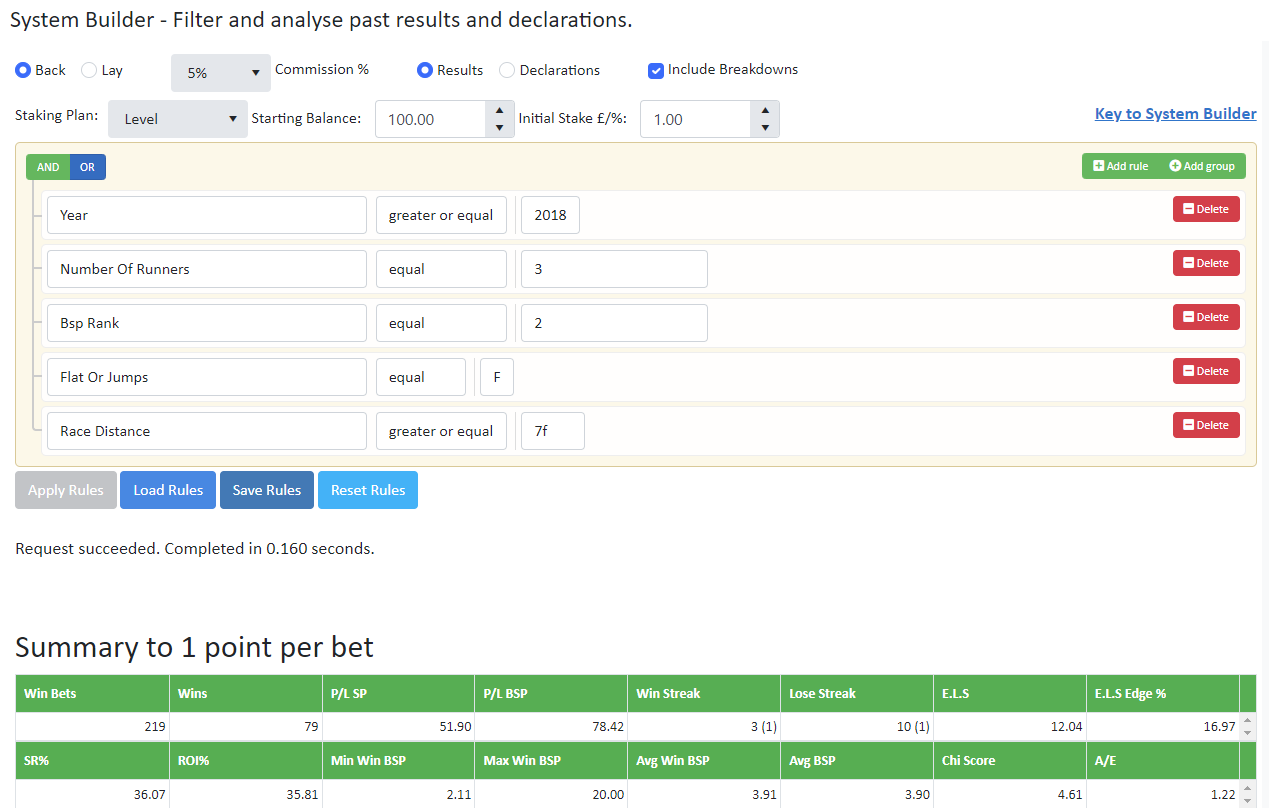 Back to the outsider of three.

So I ran the system builder again looking at all three runner races for just the third favourite to see if there were any race types that stuck out.

The table above shows how the third favourite of three fared in all races since the start of 2018 and you can clearly see that not only does it have the highest winning strike rate for chase races at nearly 18%, there is a healthy enough profit made of 115 pts, and that is after 5% commission deducted on all wins via the exchanges.

So I ran the following query through the system builder to see if I could spot anything that could increase our profits, when backing the outsider of three in chase races only.

There was also nothing outstanding either when looking at race class or race distance.

Two categories you may want to investigate a little further if you want to try this out for yourself, are the going and the horse age but I didn't want to go too deep into those in this post.

However there were two 'odds' categories that were certainly worth some attention.

If you look at the tables below you will see that there have been 28 bets where the BSP of the third favourite was over 51 and they all lost. That is effectively going to increase our strike rate and put 28 losing stakes back into our bank.

Furthermore, there have been 64 bets on the third favourite of three where the horses were forecast at over 14/1 (15 as the decimal price), and all of these lost too, so even better. 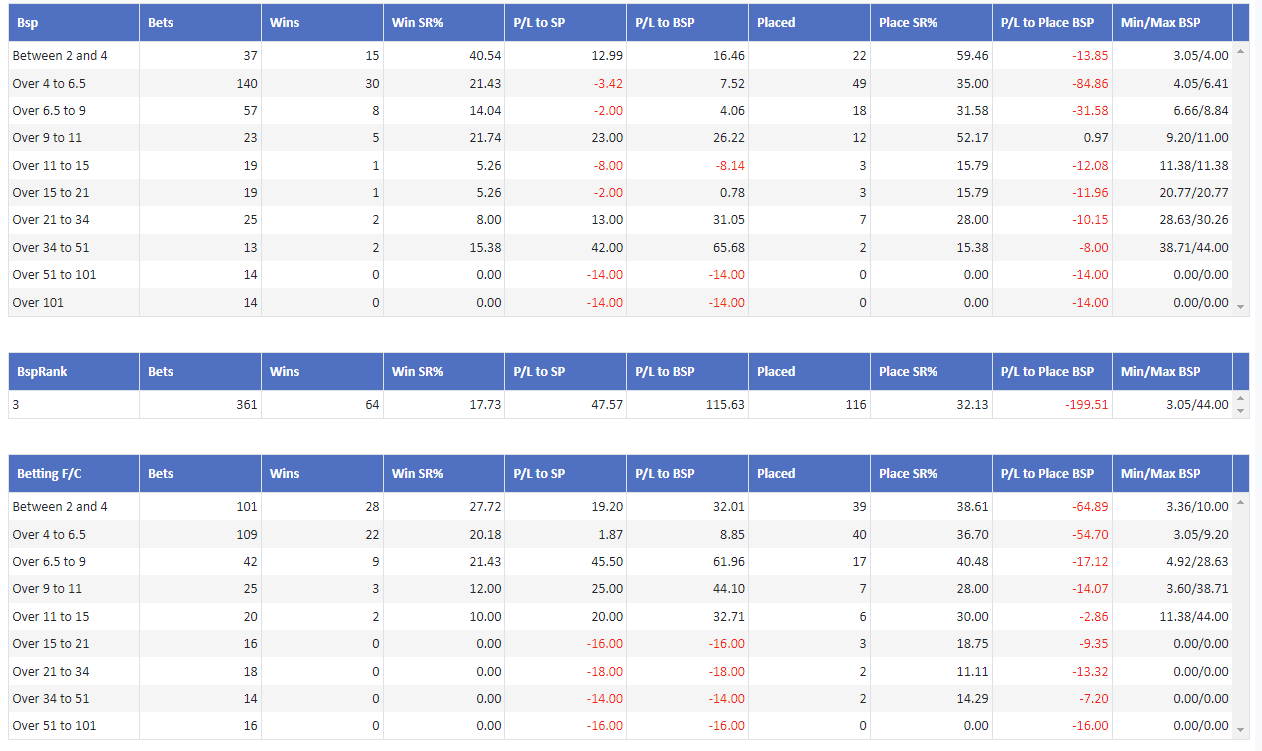 You have to be careful when eliminating certain criteria that firstly, it makes sense to do so and secondly, ask yourself, is it making enough difference to the overall strike rate and profits, compared with the number of bets we are reducing.

Bearing in mind there have only been 361 chase races with three runners since the beginning of 2018, it is not a massive number to start with and it is probable this would be a micro system we could add to our portfolio, or just be something to be aware of if betting in three horse chase races.

Backing the outsider of three

Take a look now at the table below, where we have what could be a final set of rules that you may want to consider, when betting in three horse races. 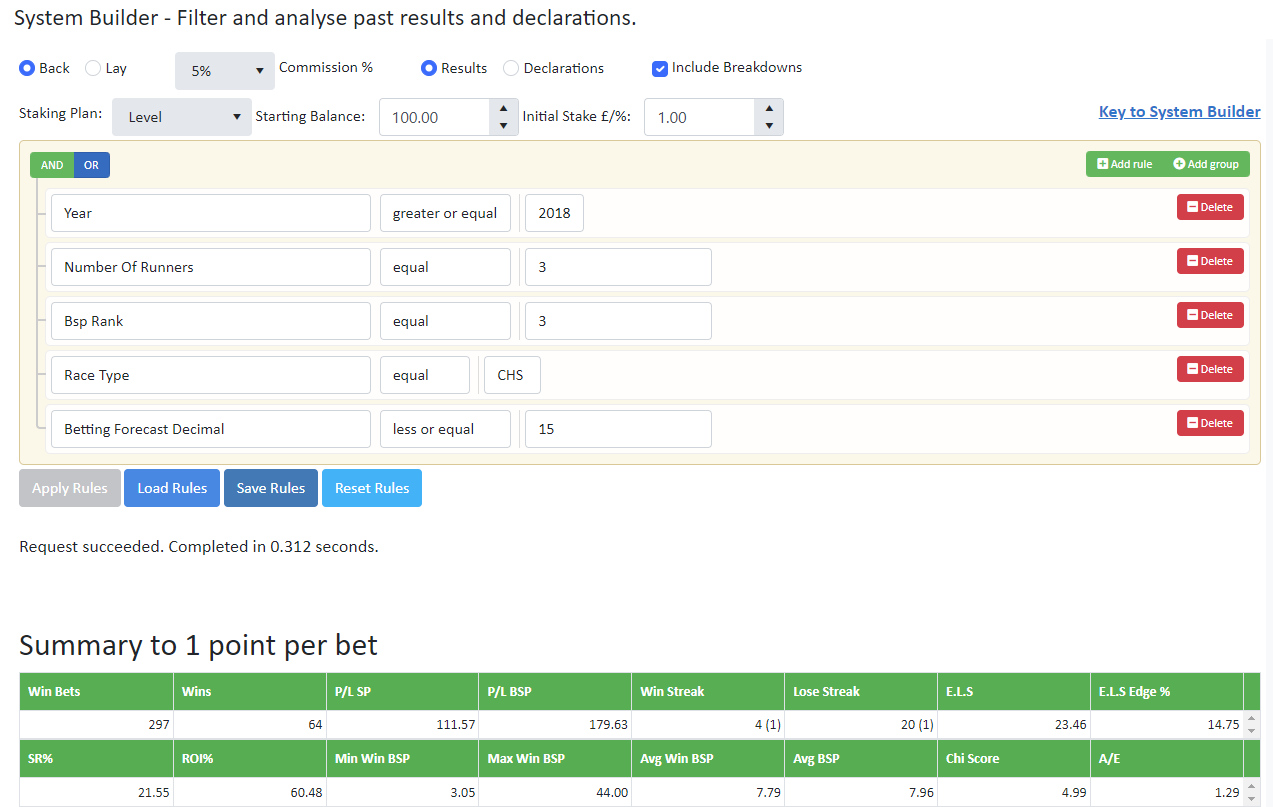 An average of about 60 bets per year and a strike rate of better than 21%. When we first looked at the outsider of three in all races they only had a 14% strike rate.

A profit of nearly 180 pts, compared to the previous loss of around -10 pts.

There is also a positive E.L.S Edge of nearly 15%, the Chi score could be a bit higher but still is a positive and the A/E is fine as anything over 1 is a positive.

You can find out more about the E.L.S Edge, Chi score and A/E values by looking through the key to the race cards

So have we found the answer when backing the outsider of three?

Well I wouldn't say we have found the golden goose that lays the golden egg and there are clearly not that many bets every year either, but I think this is definitely a proven angle or at least something you can look into further.

Hopefully it has at least shown you another way that you can use the system builder by filtering different types of races, numbers of runners etc., to find the best winning angles.

There really is a whole lot that the system builder can do for you because it is so easy to use and filter out your rules using the result breakdowns.

Be warned however, it can become very addictive!

"Hi Ian, only a short e-mail. Just a thank you for your continued hard work and excellent ratings. I may not always respond but, you can be sure that I am very grateful for all the effort you put in. I'm currently paper trading 2 methods revolved around getting 'value' for our bets and both are showing a decent return to BSP. One is using the new Betting Tissue Feature. Since Oct that has produced a profit of over 70 points using only small fields. Early days yet so I'll see how it goes."

"I was showing my son your ratings on Saturday and we watched a few win, as always, so he asked me to put £10 on Innisfree Lad for him.....and in it came at 20's!!!!! He was absolutely blown away. He had been saving for a new video camera, and now he can buy it. I've said it before, your ratings are unbelievable, please, never stop Ian..I never watch racing without your website up....thank you so much for all your hard work. Kind Regards Glyn."

“Just a quick one….The ratings are fantastic! After trialing the free meeting a day subscription I’ve only recently purchased a month membership and after testing a few theories I’ve now got a solid betting angle to look at. The past week I’ve had easily a hand full of 10-20/1 winners not including the rest of the winners! Just landed £200 with 3 winners out of 4 from a mixture of doubles/trebles/yankee/lucky15. Can’t fault it. Cracking work.”